Over the past few years, all the talk about and focus on Detroit has been exciting. Everyone is cheering for our city and so many want to participate in Detroit’s comeback. We are still in the early stages of residential reconstruction but the shortage of quality residential inventory continues to restrict progress. Investors like Dan Gilbert have initially focused on commercial development. The idea was that the first step in rebuilding the city was to start with the economic base. Businesses have been returning to the city with a concentration on Downtown and adjacent areas. This has created a significant new demand for residential development—especially in core areas around Downtown and Midtown. Many of Detroit’s residential properties experienced over 40 years of neglect. It will take time to restore properties that are financially worth keeping and to redevelop new properties. 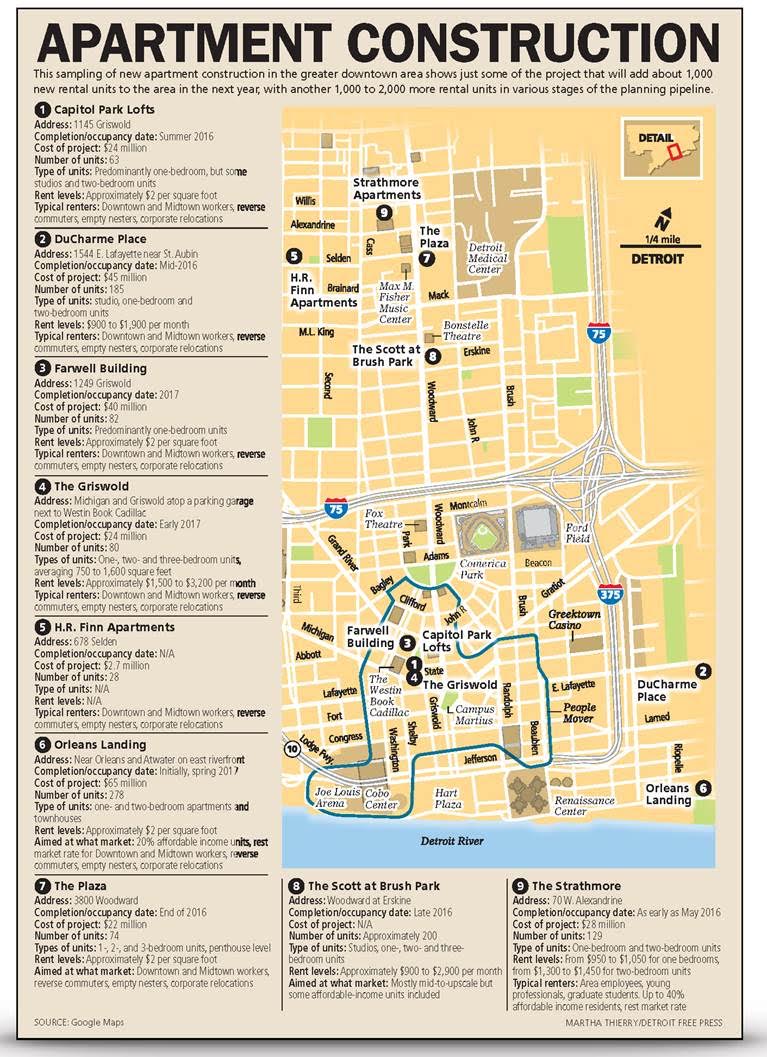 There are currently more than 1000 new apartments under construction in Detroit. Many are just coming online and will probably start out as rentals with the intent to eventually convert them to condos. In the meantime, we are in the business of selling homes and there just isn’t enough quality inventory in the core neighborhoods to meet demand. Millennials are looking to establish urban roots and many empty nester Baby Boomers are looking to trade in their homes for urban condos and lofts. People want to leave the car in the garage in favor of public transportation, walking and cycling to where they work and play. Detroit currently has 1,615 available single family homes ($85 million) and 99 condos ($21 million). Since October of 2015 Realcomp MLS shows 3,175 Detroit single family home sales with an average sale price of $43,900 and 99 condo/loft sales with an average price of $200,269.

Downtown is surrounded by the Lodge Fwy on the west, I-75 on the north, I-375 on the east and the Detroit River to the south. Downtown is primarily commercial and its condo/lofts account for most of its residential property with 32 condo sales with an average sale price of about $300k since October 2015.

Midtown is north of Downtown, with roughly Warren (just south of Wayne State) as its north boundary, John R on

the east, I-75 to the south and the Lodge Freeway on the west. Midtown had 70 condo/loft sales and only one

single family home sale since October 2015, and the average sale price for a Midtown loft was $336k.

Boston Edison is made up of four east-west streets between Woodward and Linwood. Boston Blvd on the north and Edison on the south. Fifty-four single family homes were sold with an average sale price of $149k since October 2015.

For ADA assistance, please email compliance@placester.com. If you experience difficulty in accessing any part of this website, email us, and we will work with you to provide the information.

Sign Up
Already a User? Sign In
You have been successfully registered
Please check your email.
Go to the homepage
Sorry something went wrong
Please try again.
Try again

Change password
Your password has been successfully reseted.
Go to the homepage
Sorry something went wrong
Please try again.
Try again
Already a User? Sign In

In order to log in to your account, you need to confirm your email address. Please check your inbox!
Go to the homepage